Botrytis fruit rot or gray mold caused by Botrytis cinerea is a common fungal disease of strawberry and other crops damaging flowers and fruits. This pathogen has more than 200 plant species as hosts producing several cell-wall-degrading enzymes, toxins and other compounds and causing the host to induced programmed cell death (Williamson et al. 2007). As a result, soft rot of aerial plant parts in live plants and postharvest decay of fruits, flowers and vegetables occurs. Pathogen survives in the plant debris and soil and can be present in the plant tissues before flowers form. Infection is common on developing or ripe fruits as brown lesions. Lesions typically appear under the calyxes but can be seen on other areas of the fruit. As the disease progresses, a layer of gray spores forms on the infected surface. Severe infection in flowers results in the failure of fruit development. Cool and moist conditions favor botrytis fruit rot development. Sprinkler irrigation, rains or certain agricultural practices can contribute to the dispersal of fungal spores.

Although removal of infected plant material and debris can reduce the source of inoculum in the field, regular fungicide applications are typically necessary for managing botrytis fruit rot. Since fruiting occurs continuously for several months and fungicides are regularly applied, botrytis resistance to fungicides is not uncommon. Applying fungicides only when necessary, avoiding continuous use of fungicides from the same mode of action group and exploring the potential of biological fungicides to reduce the risk of resistance development are some of the strategies for effective botrytis fruit rot management. In addition to several synthetic fungicides, several biological fungicides continue to be introduced into the market offering various options for the growers. Earlier field studies evaluated the potential of various biological fungicides and strategies for using them with synthetic fungicides against botrytis and other fruit rots in strawberry (Dara 2019; Dara 2020). This study was conducted to evaluate some new and soon-to-be-released fungicides in fall-planted strawberry to support the growers, ag input industry and to promote sustainable disease management through biological and synthetic pesticides. 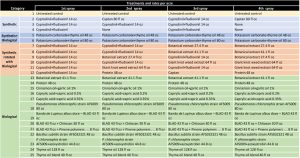 Excluding the untreated control, the rest of the 24 treatments can be divided into synthetic fungicides, a fungicide with synthetic + biological active ingredients (a formulation with two application rates), synthetic fungicides alternated with biological fungicides and various kinds of biological fungicides (Table 1). Treatments were applied at a 7- to 10-day interval between April 22 and May 17, 2021. Berries for pre-treatment disease evaluation were harvested on April 19, 2021. Each treatment had a 5.67’ x 15’ plot replicated four times in a randomized complete block design. Strawberries were harvested three days before the first treatment and three to four days after each treatment for disease evaluation. On each sampling date, marketable-quality berries were harvested from random plants within each plot during a 30-second period and incubated in paper bags at outdoor temperatures under shade. Number of berries with botrytis infection were counted on three and five days after harvest (DAH) and percent infection was calculated. This is a different protocol than previous years’ studies where disease rating was made on a 0 to 4 scale. Treatments were applied with a backpack sprayer equipped with hollow cone nozzle using 90 gpa spray volume at 45 PSI. Water was sprayed in the untreated control plots. A surfactant with methyl esters of C16-C18 fatty acids was used at 0.125% for treatments that contained protein P. chlororaphis alone and in combination with azoxystrobin, B. subtilis, thyme oil and thyme oil blend. Research authorization was obtained for some products and crop destruction was implemented for products that did not have California registration.
Percent infection data were arcsine-transformed before subjecting to the analysis of variance using Statistix software. Significant means were separated using the least significant difference test.

Thanks to AgBiome, AgroSpheres, Biotalys, NovaSource, Sym-Agro, Syngenta, and Westbridge for funding and Chris Martinez for his technical assistance.