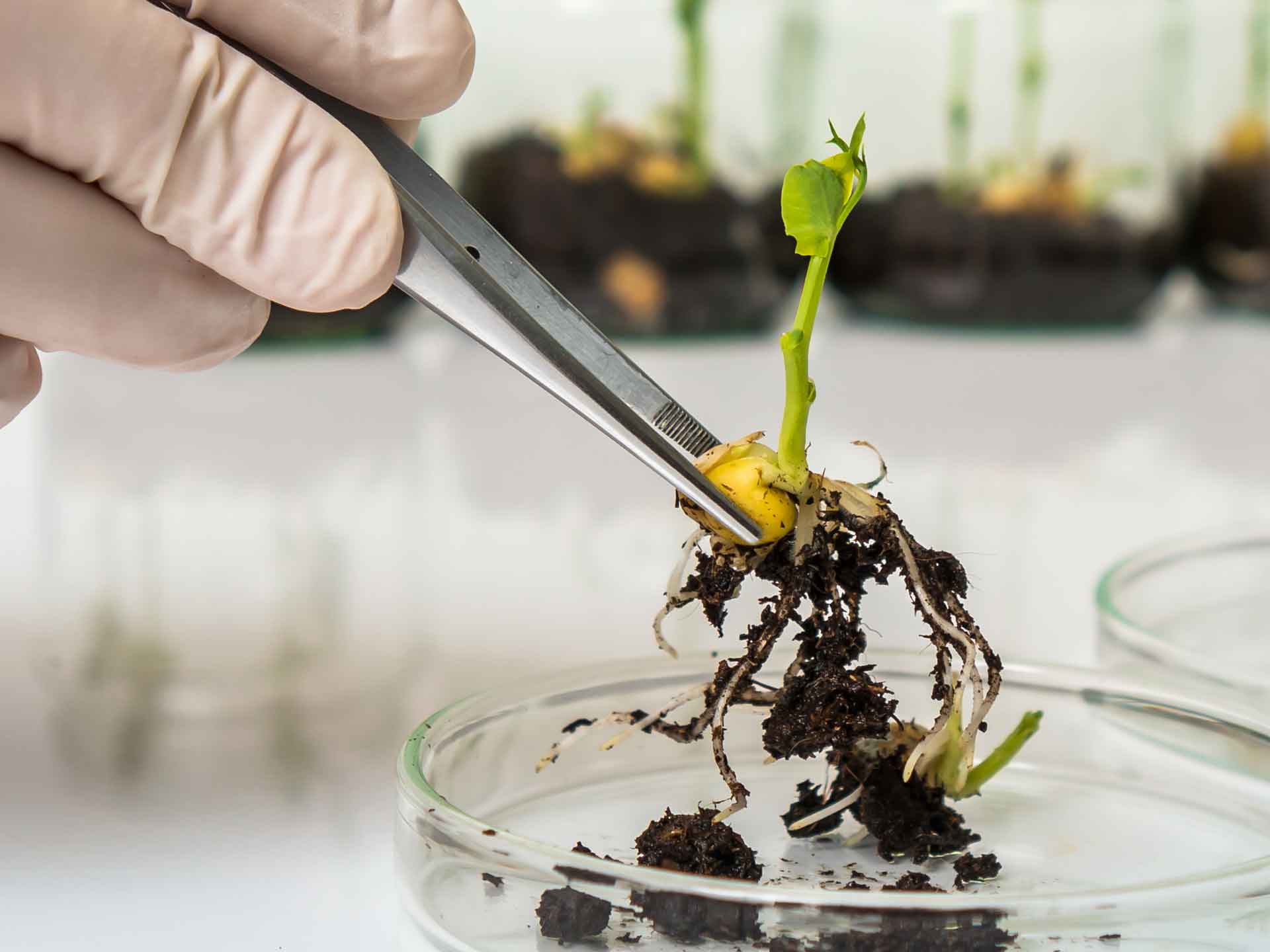 Of all the questions that were up for debate in the development of organic standards in the 1990s, the most contentious was likely the use of modern biotechnology and genetic engineering techniques. Early efforts to introduce genetically modified organisms (GMOs) and their products to organic farming and food systems throughout the world were not well received. In the United States, the question was hotly debated by the then-new National Organic Standards Board (NOSB) and culminated in a recommendation not to accept the technology. In 1997, the United States Department of Agriculture (USDA) proposed allowing specific applications of genetic engineering and asked for public comment on a blanket allowance. Public comments in response overwhelmingly opposed allowing recombinant DNA techniques and the release of GMOs on organic farms. In 2000, the final National Organic Program (NOP) rule prohibited genetic engineering in the form of “excluded methods”.

Transgenics
Since that time, both organic agriculture and biotechnology have continued to develop. New techniques to manipulate genetic information have been developed in recent years and are now in the process of being commercialized. Instead of transferring genetic information from one species to another—a process known as “transgenics”—many of the new techniques rely on modifying the existing genetic structure within the species. These include editing, deletion, multiplication or manipulation of genetic sequences as well as new techniques to induce mutations. The proponents of the gene editing describe the technology as being more precise than previous methods of genetic modification.

CRISPER
One of the new techniques that has received attention is known as CRISPR, which is short for “Clustered Regularly Interspaced Short Palindromic Repeats”. Cas9 is the CRISPR-associated protein 9, which is an enzyme that can be used identify sequences, cut and splice them into different sections of a cell’s genome. The technique can also be used to silence (turn off) genes, delete them entirely, or duplicate them. Some claim that, because the technique does not involve the transfer of genetic material between species, the same modifications could result naturally from random mutation, at least in theory.

Another genome editing technique is known as TALEN, which stands for Transcription Activator-Like Effector Nucleases. While commercial applications thus far are limited, the technologies are receiving a lot of attention, funding and investment in academic and industrial settings because of the perceived potential for the new technology to replace classical breeding techniques. The question has come up in the organic community as to whether there might be any applications of gene editing technology that would be compatible with organic farming systems.

Cisgenesis, intragenesis, and agro-infiltration were later added to the NOSB’s list of excluded methods in November 2017. These are widely accepted to be excluded methods in organic production and handling systems and recommended that the USDA issue a clarification. The NOSB noted unanimous public comment that supported adding these three techniques to the excluded methods list. The USDA did the same for cell fusion techniques in 2013. The USDA has not yet responded to these NOSB recommendations. Those who were involved in responding to the first proposed rule find themselves in familiar territory. “I see history repeating itself,” said former NOSB Chair Michael Sligh. “Whatever promises the new technologies have, they are unlikely to reach their potential given the lack of a holistic approach and the larger issues of who owns the technology, who decides how it will be applied and who pays when it goes awry.”

Mandatory Labeling
The USDA has also developed mandatory labeling regulations for bioengineered foods. The status of foods developed using these new techniques is still an open question. If the foods can be developed through conventional breeding technique or are found in nature, then they are not subject. Similarly, foods where bioengineering techniques cannot be discovered are also exempt. However, it is currently unknown whether novel foods not found in nature and developed with these new technologies could be developed with conventional techniques. Different laboratories indicate that the ability to detect foods made from the new techniques will be possible given reference material that has the “fingerprint” of the bioengineered food. Companies that develop such food are considered by laboratories and USDA Accredited Certifying Agents to be likely to use a marker or identifying sequence to be able to protect their intellectual property before they commercially release such products.

Gene Editing
Academic and industry sources claim that gene editing has several advantages over earlier recombinant DNA (rDNA) techniques, such as precision and predictability. However, such advantages are not obvious to various farmers, seed companies, and others involved in the organic community, who have expressed skepticism in their public comments. The companies that introduced the earlier techniques made similar claims that turned out to be inaccurate, at least in some cases. While there are some organic farmers who think that there may be potential benefits someday, no known existing applications are accepted. As before, the proponents claim equivalency with existing classical breeding, while at the same time distinguishing it from classical breeding in terms of novelty, speed, and ability to modify the organisms to get certain specific traits. Among plant breeders, the distinction between the two approaches is starker.

International Implications
The new technology is expected to have international implications. The European Court of Justice ruled in July of 2018 that CRISPR-Cas is a form of genetic engineering and food produced by it is subject to the European Union’s (EU) GE food labeling law. The international organic network IFOAM-Organics International published a position paper on the Compatibility of Breeding Techniques in Organic Systems. The paper documents the potential for new genetic disruption caused by the release of the technology. As in the US, the subject of the use of genetic engineering techniques has been the subject of a polarizing debate. Monika Messmer of the Research Institute for Organic Agriculture in Switzerland, a plant breeder who is one of the authors of the position paper, said in an email, “Organic breeders are very much against mutagenesis and any type of genetic engineering; conventional breeders claim that they need the newest tool to combat climate change and [a] growing population.”

Marker-assisted Breeding
One exception is the use of marker-assisted breeding. Classical plant breeders find the gene mapping to be a useful tool in the selection of varieties suitable for organic farming conditions. By having a greater understanding of plant genomes and using classical breeding, it would be possible to accelerate the development of varieties that are compatible with organic farming systems. The NOSB has recommended that marker-assisted selection not be considered an excluded method.

Use as Diagnostic Tools
These new techniques are applied to more than plant breeding. More applications are related to human health and pharmaceutical research. CRISPR and other related technologies could conceivably be useful to organic farmers as diagnostic tools for soil health. “We know more about the surface of the moon than we do about life in the soil inches beneath our feet,” said organic farmer Klaas Martens. “CRISPR and [other genomic tools] could give us insights to better manage these ecological systems.”

The use of cisgenic techniques in the modification of animal traits has several ethical, as well as health and environmental concerns. However, animal cloning is not considered compatible with the current organic standards, at least by consensus of the NOSB and USDA’s Accredited Certifying Agents. Other applications may involve the use of gene editing to enable greater confinement and higher stocking densities in Confined Animal Feeding Operations (CAFOs). One exception to excluded methods in the organic regulation is the use of animal vaccines. While the regulation allows for the use of genetically modified vaccines, the status of specific vaccines is unclear.

Gene Drive
Another new technology that has been introduced since the first proposed rule is the gene drive, which uses gene editing techniques to delete functional genes and manipulate a wild population to carry a uniform or single allele. The technique may be used to introduce insect pests or weeds that would produce sterile or otherwise non-viable offspring or seed, potentially displacing the native population in a few generations. The concern is that gene drive technology permanently and irreversibly alters ecological systems. Once released, a gene drive organism can no longer be controlled and has the potential to become a pest or weed that it is intended to displace. Organic farmers are concerned that the presence of gene drive organisms will can migrate to organic farms and undermine stable and resilient systems of ecological pest and weed management.

Long Term Implications
Several of the sources interviewed for this story raised questions about the long-term and broader ecological implications of the new biotechnology. Organic agriculture is a holistic system, and biotechnology techniques are based on reductionist methods. Single-gene resistance is used as one example. Breeding for vertical resistance—complete immunity based on a single gene—fails when the pathogen evolves to overcome that plant’s immunity. Multi-gene or horizontal resistance may not provide the absolute immunity of single gene resistance, but the resistant variety will be more resilient against subsequent mutations and the evolution of strains of the pathogen that overcomes the plant’s immune system. Another aspect that is not understood is what effects the new technology will have on the soil biome.

Proponents of the technology acknowledge that risks are involved, but claim they are minimal and do not warrant any additional regulatory oversight. Others are skeptical and point to how the government has reassured the public for years that regulatory oversight has prevented risky applications of GMOs from being commercially released into the environment. Off-target effects may take years to discover. “We are already seeing unintended consequences from these new technologies” said Sligh.