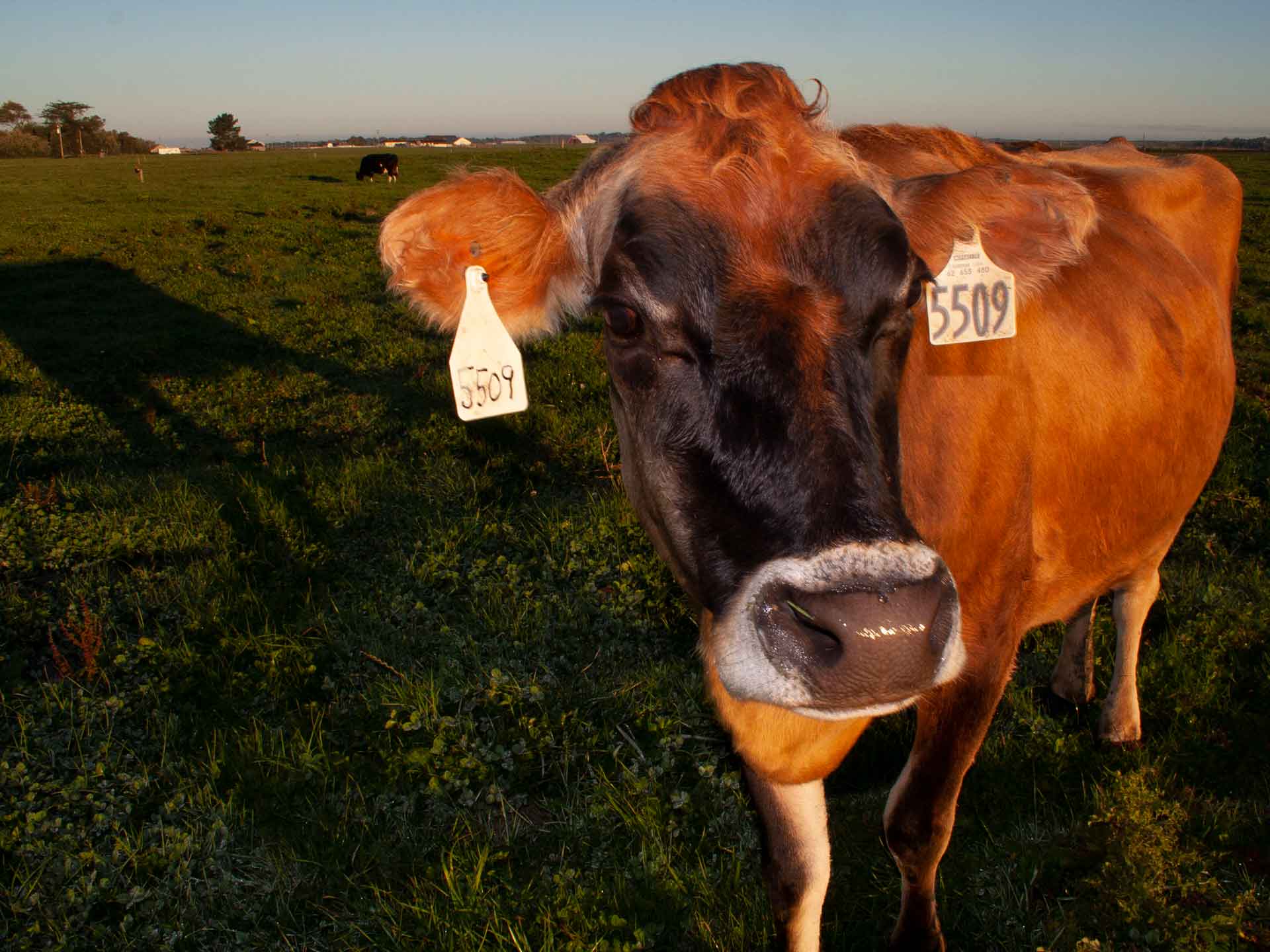 Opportunities for organic dairy producers include higher market prices and growing market shares. But, to the familiar challenges of costs and management constraints, is added a difficult market outlook for beverage milk products that have been the mainstay of organic milk utilization. This article explores these issues.

About 18 percent of U.S. milk comes from California. California also represents about 12 percent of dairy consumers, including many who buy organic milk. Organic milk production and marketing in California exemplifies the complexity of the outlook for this segment of the dairy industry nationally.

One the supply side, the requirement that organic dairies make substantial pasture available to their herd is a limiting factor for expansion of organic production in the dry San Joaquin Valley where most California milk production is located. In that region tree, vine and vegetable crops compete for land and irrigation water and typical milking herds have thousands cows. The organic segment has therefore concentrated in the coastal hills and valleys north of San Francisco that are less suited to intensive irrigated farming. There high-priced wine grapes claim much of the suitable cropland, and the remaining dairy industry has shifted to organic practices. Let us examine some of the economic facts that drive the situation and outlook for the organic dairy industry.

Comparing Farm Costs and Returns
We use data from the California Department of Food and Agriculture on dairy farm costs and returns for more than 100 representative dairy farms across the state. The reports identified farms by breed of cow, region and whether they were organic. Table 1 summarizes costs and returns for a sample of 13 organic farms in 2017 (the last full year of available data) compared to a sample of 96 conventional farms. The organic farms are mostly in the North Coast region and the conventional farms are mostly in the San Joaquin Valley. A typical conventional dairy has thousands of cows and that produce about 24,000 pounds per year each. A typical organic dairy has a few hundred cows that produce about 16,000 pounds per year.

Table 1. Comparing Costs and Returns for Organic and Conventional Dairies 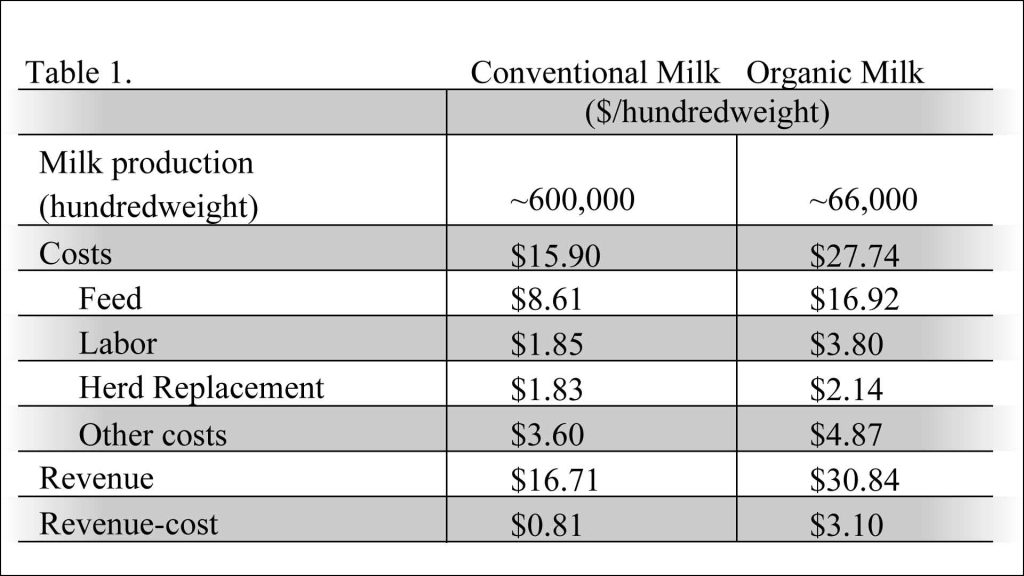 Three facts stand out in the cost and returns data:

If it were feasible to scale up the organic industry and continue to return an extra $3/hundredweight, then the dairy industry would be rapidly converting to organic. Some of that is happening, but it is not easy. Three problems are: (1) organic dairies require much more management and land per hundredweight of milk, and thus scale diseconomies keep organic operations small; (2) neither the opportunity cost of operator time and management or the scarcity of the required pasture is included in the costs displayed in Table 1; and (3) the amount of organic milk that can be sold at prices that are almost double conventional milk prices places a limit on expansion of organic dairies, even if the land and management could be found.

We turn to the size of the market next. 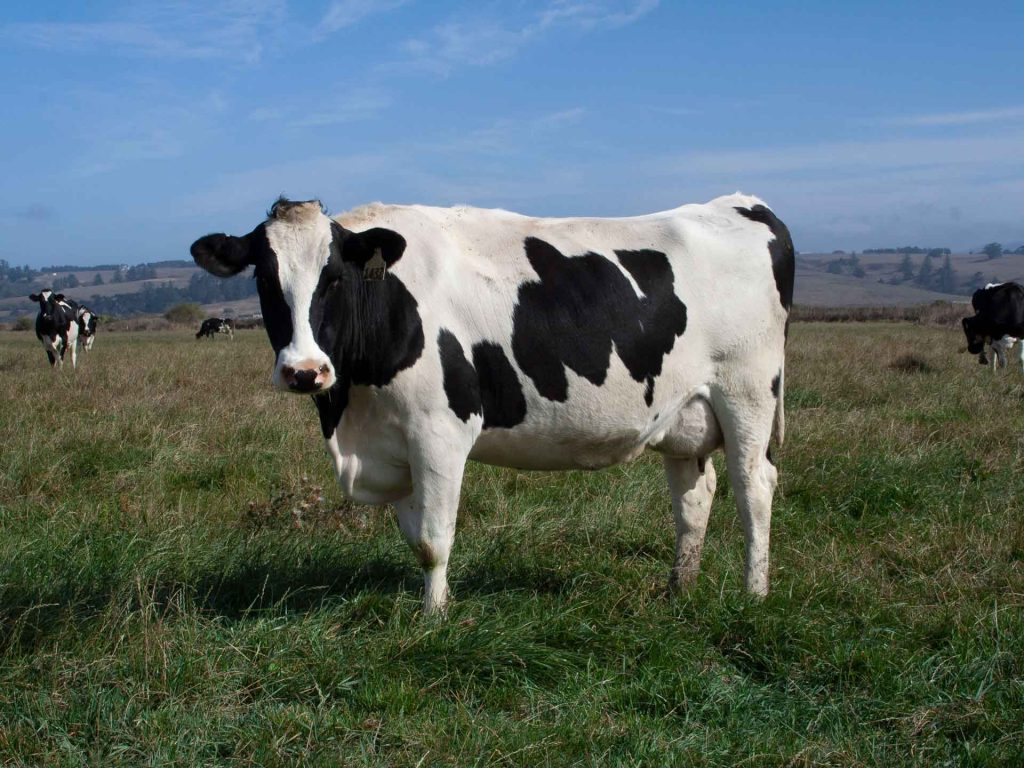 Markets for Organic Dairy Products
Organic milk is mostly sold in beverage form nationally and in California. Figure 1 shows that the organic share of beverage milk quantity in California has doubled in the ten years since 2009 from just over 4 percent of beverage milk sales (known as Class I products under federal regulation) to about 8.5 percent. But this expansion in share masks a concern. All beverage milk sales have fallen, so organic milk has gained a rising share of a shrinking market. This overall decline in beverage milk quantities is severe enough that quantity of organic beverage milk sold fell from about 54 million gallons in 2013 and 2014 to about 47 million gallons in 2016 and has remained low through 2018 (using data through October to extrapolate to the 2018 annual quantity).

The higher farm price, and considerations in where and how organic milk is sold, means that retail price of organic milk is more than double the retail price of conventional milk in California. Organic milk is more than 20 percent of the total expenditure on beverage milk in California. Within the beverage milk category, the organic milk share tends to be about one percentage point higher for whole milk (or 2 percent-fat milk) than for low fat or skim milk—perhaps reflecting the tendency for school milk to be low fat and non-organic.

United States Department of Agriculture (USDA) data show somewhat lower national shares of organic beverage milk than shares in California. The national share has was about 5.5 percent or a little less for 2017, 2018 and the first three months of 2019. Like California the share of organic in whole milk is higher—about 6.5 percent.

Future Considerations
The higher prices and rising shares of organic milk are positives for the industry. Concerns include the limits of an economic model that requires high market prices to offset lower milk per cow, higher costs of feed, higher labor costs and diseconomies of size and scale.

The higher farm price of organic milk must be supported by higher consumer willingness to pay and that has been evident for beverage milk products. One of the challenges for beverage milk demand has been the expansion in the sales of beverages made from plant sources, such as soybeans, almonds and many others. An open question is the degree to which these products tend to compete for some of the same customers that would otherwise be drawn to organic milk. 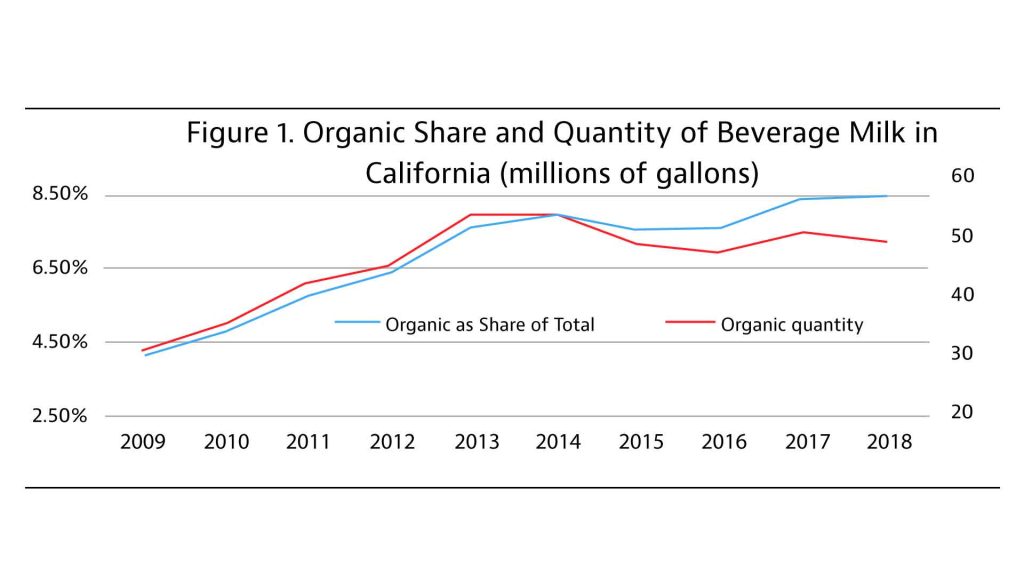