Earthworms are definitely the movers and shakers of the soil world. Ravenous creatures, even without teeth, earthworms can eat half their body weight every day. Since an adult night crawler, Lumbricus terrestris, may reach a weight of 0.39 ounces, that adds up to approximately four and a half pounds of soil consumed, digested and recycled by a single adult nightcrawler each year.

The Good
The number of earthworms per acre depends on the type of soil. The number could be a hundred, or might even number into the hundreds of thousands per acre. For the farmer, that equates to a whole lot of soil movement. The resulting worm feces – or, in more polite circles, worm castings – is a good thing. Once organic matter has worked its way through a worm, the nutrients in castings are much easier for plants to absorb and utilize.

Shallow dwelling worms are the most beneficial to the top soil. Not only do their burrows allow the movement of air, but also the movement of water. In areas of compaction or overuse, such as land developed by urbanization, or heavily-farmed land, the worms’ movement through the soil is especially important.

Nightcrawlers are surface feeders, coming up from their burrows at night to feed. They also store snacks for later. They are the only earthworms known to pull bits of leaves and plant debris down into their burrows where it further decomposes before they ingest it.

Worm populations often increase under reduced tillage systems, according to results from tests conducted in Indiana and Illinois tilled and untilled corn and soybean fields.

Worm Biology
Earthworms have no skeleton. The earthworm’s digestive system is a tube running from the mouth to the rear of the body. Consuming and digesting organic matter, such as fallen leaves, allows worms to move nutrients such as nitrogen and potassium from the surface down into the soil.

Worms have a simple nervous system – cutting a worm in half does not seem to unduly stress it out. However, contrary to popular belief, most worms chopped in two will not grow into two separate worms. If the head portion is long enough, it may grow a new tail and continue to live, but the tail portion will not grow a new head, or new internal organs, and will eventually die.

Earth worms have no lungs, instead they breathe through their skin. This process is known as diffusion. A worm’s skin must stay moist to keep diffusion working. Too much moisture, such as water saturated soil from heavy rainfall is also detrimental to worms. It doesn’t allow gases to diffuse across the worm’s skin. In such a case, if the worm doesn’t surface, it will suffocate. In Germany, night crawlers are known as “rain worms.”

An earthworm’s head is at the thicker, rounder end. It has no eyes or ears, but in addition to a toothless mouth it has a tiny lip-like appendage called a prostomium. This is a sensory organ used to navigate, or feel its way through the soil. Although an earthworm has no eyes, it can still sense light, especially with the head end. Extended exposure to UV light will paralyze a worm and cause it to die within a short span of time.

An earthworm’s body is made up a series of reddish-brown flexing segments. It uses the segments to propel itself. Each segment is covered with tiny bristles, called setae. These bristles act as traction devices to help the worm move. The setae also assist the worm in navigation. 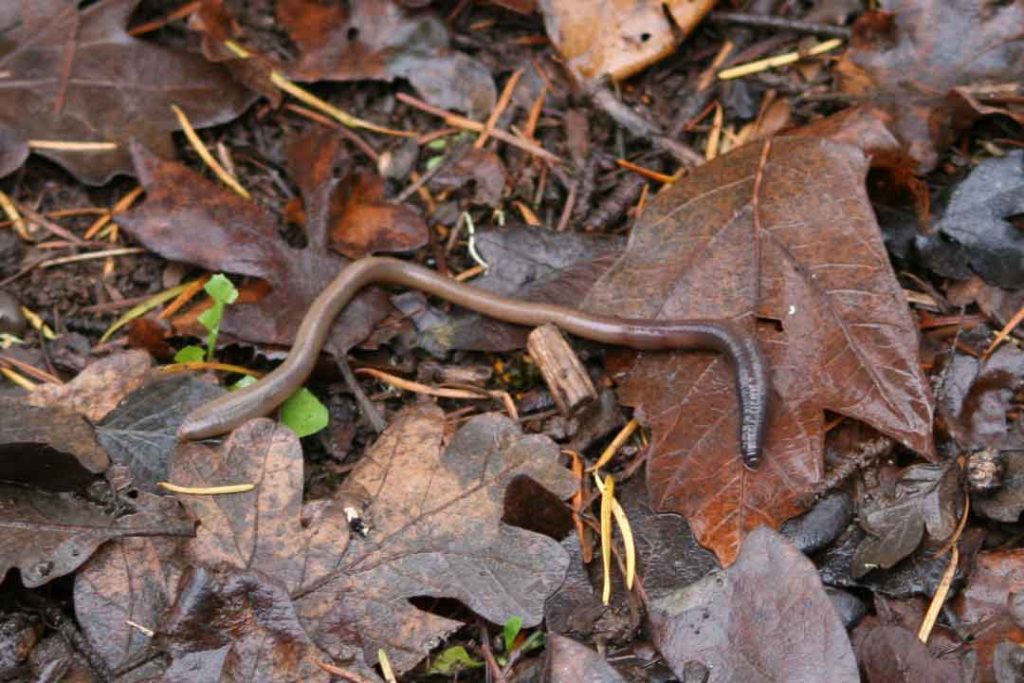 Making Worm Babies
Earthworms have the best of both worlds. As hermaphrodites, worms are both male and female. Although unlike slugs and snails, they cannot self-fertilize. A worm has a pair of ovaries and two sperm receptacles. When the romantic mood strikes, a worm meets up with another at the surface. There they line up, join together and exchange sperm.

That distinguishing pink bump around an earthworm’s body is called a clitellum. Not only is it the defining feature of this class of worm, but it’s also part of the worm’s reproductive system. After fertilization, the clitellum forms a slime tube filled with albuminous fluid. Albumin is a water-soluble protein – the same protein found in milk, blood plasma and egg white.

The worm wriggles forward out of the tube. The tube first passes over the female pore, which deposits eggs. As the worm continues to crawl forward, the slime tube passes over a male opening. The eggs are fertilized with stored sperm from the other parent worm. The tube closes off to form a tiny, lemon-shaped egg case. This egg cocoon is deposited underground. A worm produces 3-80 cocoons per year. Each contains from 1-20 fertilized eggs.

The gestation period for worms is from 2-12 weeks, depending on factors such as soil type and temperature. Baby worms hatch and emerge tiny, but fully formed. They become mature enough to reproduce at 3-4 months. Night crawlers can grow to 14-15 inches and may live up to six years, although two years is more likely. 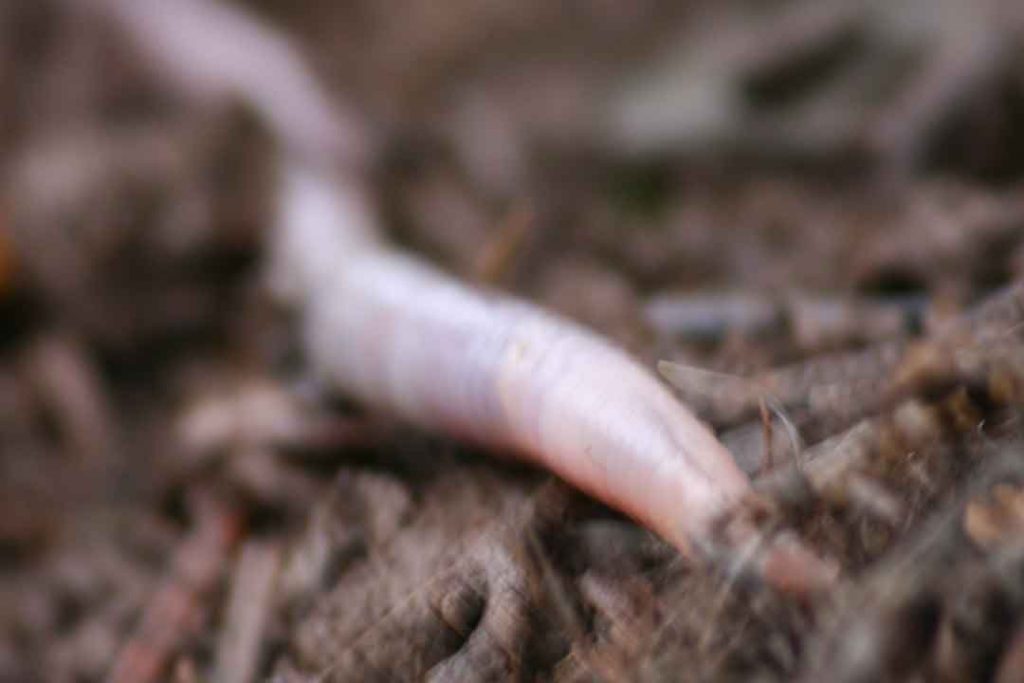 The Bad
Night crawlers are not indigenous to North America. They originally came over from Europe, and are now spread throughout North America and Western Asia. It’s suspected they came over in soil used as ballast in the bottom of ships.

Still, there are many types of earthworms that are indigenous to the US. There are approximately 6,000 species of earthworms. Around 120 of those species are widely distributed around the world. Earthworms are generally considered beneficial to the soil, although there are times when the presence of earthworms has a negative effect.

After the glaciers retreated, the northern forests evolved. The resulting ecosystem does not benefit from earthworms. Invasive species of earthworms from the suborder Lumricina can have detrimental effects on temperate forests. These forests need thick layers of slowly decomposing duff – such as the layer of needles, bark and debris under pine or fir trees. When earthworms invade the forests, they consume and break up the organic matter and spread it down into the soil. This increases the cycling and leaching of nutrients. Native forest plants have adapted to the presence of thick layers of slowly decaying organic matter. With this thick layer broken up too quickly by worms, the young plants may face conditions in which they are not evolved to adapt.

The change in the forest has resulted in damages to some trees, such as sugar maples, and to forest-floor plants such as trout lilies, trilliums and some ferns. Earthworms are blamed for the invasion of Japanese barberry, and for buckthorn overrunning oak forests.

While earthworm tunnels are beneficial to farmland and gardens with compacted soil, the burrows in forest land may speed the passage of water seeping through the forest floor, which can have a negative impact.

Eradicating earthworms from invaded forestland is virtually impossible without spraying pesticides, which would kill other species as well. But organic growers with cropland near forested ecosystems can take measures to help prevent the spread of earthworms. If you compost with the aide of earthworms, you can stop using worms. Although it may not be practical, freezing compost material for at least a week before spreading it will kill worms and their eggs.