Imagine taking a math test, solving a really difficult problem, then discovering that your solution answered the next two questions as well.

That’s essentially what happened to Oregon State University (OSU) plant pathologist, Jennifer Parke. She set out to solve one problem—treating a specific disease in container nurseries.

When that research was successful, Parke then received a Western Sustainable Agriculture Research and Education (SARE) program grant to expand her research to new systems and solve other problems for other growers.

Now, if her research keeps bearing fruit, organic vegetable growers may finally have an economical way to manage weeds other than slow and costly hand weeding.

Parke’s solution is soil solarization—trapping the sun’s energy under a layer of plastic to heat the soil enough to kill pathogens and weeds. It’s a technique proven effective in hotter climates like California and Israel, but one that didn’t work in the cooler Pacific Northwest.

“But a few years ago, for the greenhouse industry, manufacturers introduced horticultural films with anti-condensation properties,” Parke explained. “They reduced the constant drip-drip-drip inside greenhouses.”

She envisioned a different application.

“Condensed water droplets reduce the amount of solar radiation able to pass through the plastic, and reduces soil heating,” she said. “So we wondered if these new films would work for soil solarization.”

With funding from Western SARE and the Western IPM Center, Parke tested the idea and got the answer. Yes, the new plastic works. In 42 different nursery sites from Southern California to Northern Washington, the non-condensing film heated the ground about 10 degrees Celsius higher compared to non-solarized plots.

Problem One: Sudden Oak Death
Parke’s initial idea for using the technique was to combat Phytophthora ramorum, the plant pathogen that causes sudden oak death and ramorum blight. A couple of dozen container nurseries in the West had become infested by the pathogen. They couldn’t ship plants to non-infested areas, and had no way to kill the pathogen’s soilborne phase.

“They couldn’t use fumigants in most cases because of their proximity to buildings and roads and homes,” she explained.

But solarization did work. Parke and her team showed the technique heated up the soil enough to kill the pathogen, but not the beneficial microorganisms that help make soil fertile.

“It’s not sterilizing the soil,” she said. “The pathogen has a lower heat tolerance threshold than other types of microorganisms.”

Parke’s team then leveraged the resources of the uspest.org website, a weather-based decision-support tool that the Western Integrated Pest Management Center has funded for several years. Oregon State University postdoctoral scientist Fumiaki Funahashi and professor Leonard Coop of the university’s Integrated Plant Protection Center built an online model that shows any nursery grower how long they need to solarize their ground to know it’s disease free. Problem one was solved.

Problem Two: Field Nurseries
Oregon’s greenhouse and nursery industry is the state’s top agricultural moneymaker, bringing in more than $900 million in 2016. So that’s where Parke turned her attention next.

“We thought, ‘Why limit it to container nurseries? Why not try it in field production nurseries?’” she said.

Those nurseries are a sight to see. They grow hundreds of different species of trees and shrubs, often from seed on raised beds. Parke’s target in those nurseries wasn’t necessarily Phytophthora species, but other soilborne diseases.

“And then lo and behold,” she said, “it was very effective at suppressing weeds.”

The J. Frank Schmidt and Son, Co. nursery in Boring, Oregon was one of the first field nurseries to test the technique.

“We started working with solarization in about 2014 after a few really wet springs and an abundant crop of weeds and problems with diseases,” explained Production Horticulturalist Sam Doane.

The results of the first trials were dramatic.

“There was basically a line in the field between solarized and non-solarized,” Doane said. “We had weeds and no weeds.”

Not only did the solarized blocks have far fewer weeds, the plants were taller and healthier and the stands were thicker. That was a surprise.

“It’s pretty clear we were reducing the amount of fungal and bacterial pathogens as well,” Doane said. “Before, when we had bad years and smaller-than-desired crops, we assumed it was due to weather. We can see now there’s more than just weather happening here.”

After seeing the results of just a few trials, J. Frank Schmidt and Son went straight to full scale implementation. The company is able to solarize about 70 percent of its production land each season.

“We knew things were going right when our field foreman said to the manager, ‘What are we going to do all summer? There’s no more weeds,’” Doane said.

Problem Three: Organic Vegetables
For many organic growers, weed control is their most difficult challenge.

Without chemical herbicides to suppress weeds, growers are forced to use a lot of labor to hand weed their crops, which is expensive, or till their ground frequently, which is hard on the soil.

Solarization offers an alternative—if it can be shown to work in that production system.

Parke’s team is now testing solarization with and without a cover crop, and testing the minimum amount of time needed to successfully solarize fields in the Pacific Northwest. They’ve tested three, six and nine weeks, and are doing more trials to see if two weeks of solarization is enough.

“At two weeks, a lot more people will be able to solarize because it won’t cut into the growing season as much,” she said. “I think it could work after an early spring crop, like peas. Then you solarize in mid-summer before fall planting. Because we see weed suppression carry over into the next year, presumably you could even solarize one year and plant the next spring and still see reduced weed emergence.”

The team is expanding the online tool it built for nursery growers so that anyone who wants to solarize can use it. The model would link to local weather stations and tell growers how long to solarize to kill specific weeds and pathogens. Soil physicists Maria Dragila and Maziar Kandelous are providing input, and extension specialist Lloyd Nackley and Coop are incorporating grower feedback to make the website easier to use.

While solarizing a field in the summer takes that land out of production temporarily, Parke is hopeful that it can be successfully incorporated into organic growers’ rotations.

“The film is approved for organic use, and it can really reduce the labor costs of weeding,” she said. “We’re very excited about this and think it has a lot of potential, particularly if we can reduce the amount of time required for solarization.”

Problem three, then, gets partial credit as a work very much in progress. 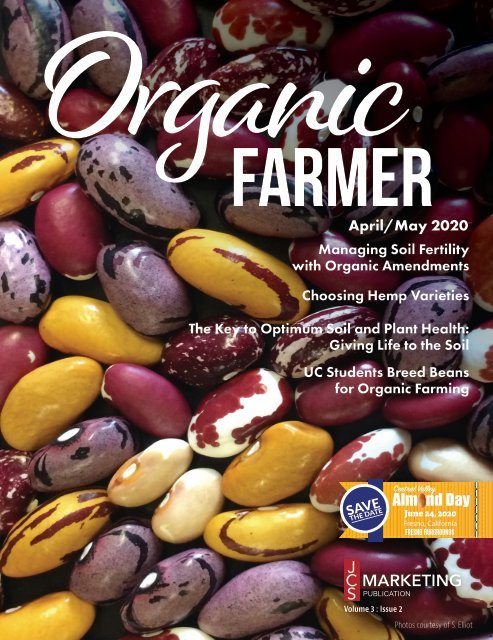 Roadmap to an Organic California

The Key to Optimum Soil and Plant Health: Giving Life to the Soil