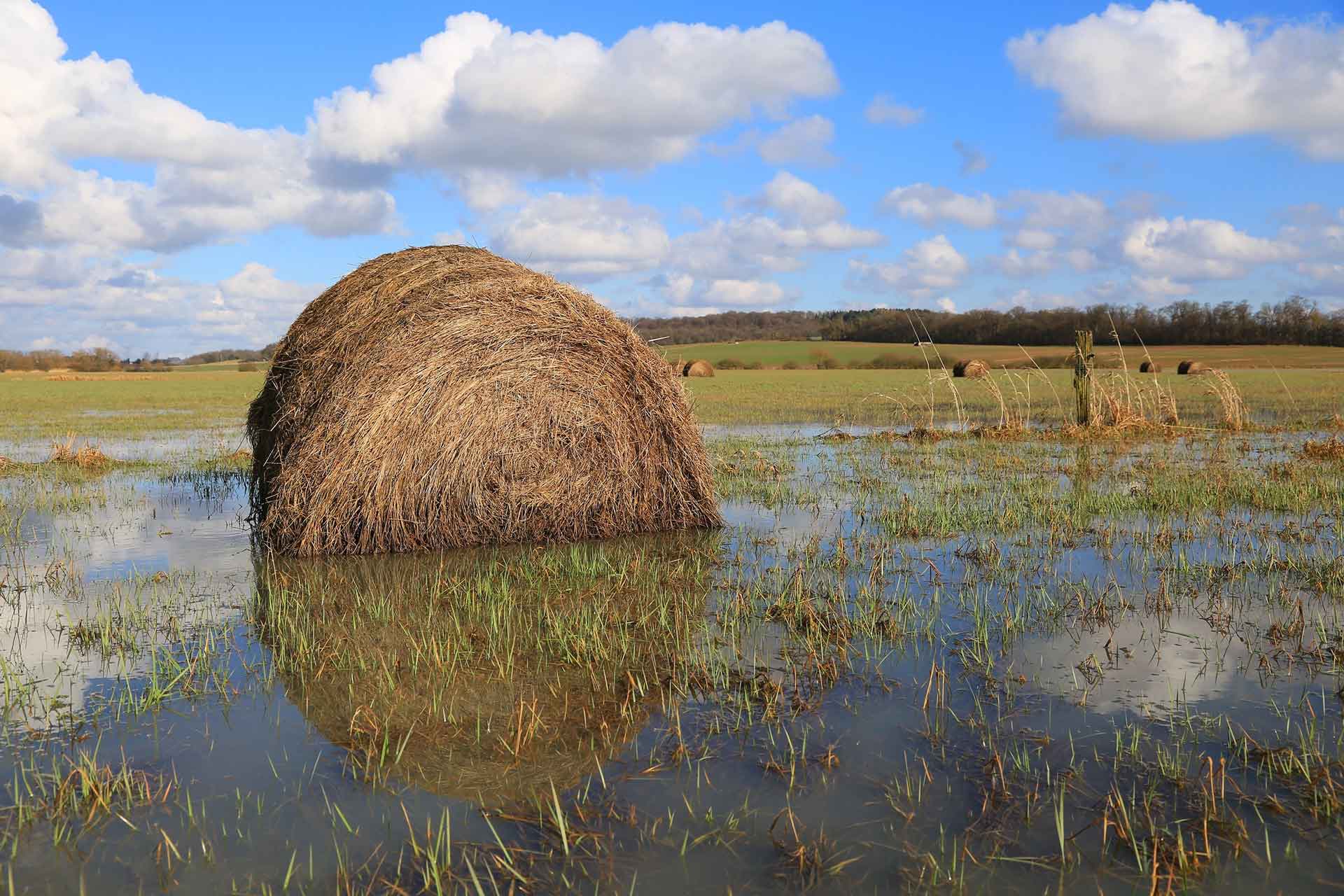 The latest report from the Intergovernmental Panel on Climate Change predicts substantial changes in precipitation patterns around the globe, which has major implications for freshwater resources. Reduced rainfall and water scarcity are likely consequences of climate change in many regions. For example, desertification—an irreversible reduction in the productivity of land that was once arable—is a growing problem in Africa where water is already a scarce resource and food insecurity an overwhelming issue. In many places around the globe, water is rapidly becoming a precious resource, and the amount of land suitable for agricultural production is shrinking. However, a lack of water is just one piece of the climate change puzzle we must solve.

On the other end of the spectrum, more intense and frequent rainfall is presenting another obstacle to food production. This year, the Midwest experienced record flooding, affecting millions of people and taking a huge toll on U.S. agriculture. In Nebraska alone, crop and livestock losses are expected to exceed $1 billion. Given that extreme weather events are predicted to become the new norm, we will likely need to strengthen relief programs currently in place to ensure farmers and ranchers are adequately compensated for their losses. While no single weather event can be attributed to climate change, the increased incidence of unexpected and extreme weather events over time is indicative of a changing climate.

Whether rainfall is too scarce or too plentiful, unpredictable precipitation patterns have major consequences for agricultural producers. On one hand, water scarcity can stunt crop growth and increase vulnerability to pests and diseases. On the other hand, too much water can wash away freshly sown seeds; heavy rains can damage crops, reducing marketable yields. Heavy rainfall early in the growing season can also waterlog soils and delay planting, which can have serious economic implications for growers, particularly those working with a short growing season or trying to time deliveries with a particular market. Precipitation patterns in many areas of the world were once relatively predictable, allowing farmers to plan planting and harvesting times. Yet, these patterns are becoming increasingly erratic. As a result, growers must be ready to respond to rapidly fluctuating weather patterns, which makes it harder for them to plan and increases their vulnerability to production risks.

Emissions
While the Earth’s climate has changed many times over the millennia, the rate of change we are currently witnessing is much greater than anything nature has previously experienced. Shifts in climate that would normally occur over geological time scales are happening within a human lifetime; a clear indication we do not have the luxury of continuing business as usual. While many human activities produce the greenhouse gases largely responsible for climate change (carbon dioxide, nitrous oxide, and methane), mainstream agricultural practices are a major contributor of the latter two, which happen to be the most potent greenhouse gases. Interestingly, the rate of nitrous oxide and methane emissions from agriculture is influenced in part by soil moisture levels. For example, spikes of nitrous oxide emissions tend to occur when soil moisture levels are high. Therefore, we can expect emissions of these greenhouse gases to fluctuate alongside changing precipitation patterns. Given these changes, it is essential we support the adoption of agricultural management practices that reduce greenhouse gas emissions and increase resilience to the effects of climate change we are already experiencing.

Healthy Soils
Enter the Organic Farming Research Foundation (OFRF), a national non-profit committed to improving organic production systems and supporting the success of organic growers. Through national surveys of organic producers and analyses of the latest agricultural research, OFRF identified soil health as a key management strategy that can help farmers and ranchers mitigate and adapt to the effects of climate change. A large body of research clearly indicates healthy soils provide a number of valuable services that can help farmers adapt to changes in water availability. For example, healthy soils have greater water holding capacity compared to degraded soils, which means healthy soils are better at retaining water when it is scarce and absorbing excess moisture when it is abundant.

The Natural Resources Conservation Service has identified four key soil health principles that support these services: 1) keep soil covered, 2) diversify crops, 3) maintain living roots, and 4) minimize disturbance. However, implementing practices that achieve these principles—such as conservation tillage to reduce soil disturbance—can be at odds with other production goals, such as weed management. Moreover, there are a number of different ways growers can implement each of these principles. For example, maintaining crop diversity can be achieved by planting polycultures, implementing diversified crop rotations, and/or growing cover crops. Growers need to understand the benefits and challenges associated with each of these strategies, and under what conditions these practices are most likely to succeed. To overcome these implementation challenges, OFRF funds innovative research on organic soil health management so organic producers have the knowledge they need to confidently select strategies that make sense for them.

Research by OFRF
Recently, OFRF funded a project exploring the potential for soil health practices to improve a farm’s resilience to water shortages, research that could help growers adapt to shifts in water availability associated with climate change. The project was led by Dr. Amélie Gaudin at the University of California, Davis in collaboration with Scott Park, an organic grower in the Sacramento Valley. A primary goal of the project was to empirically test how healthy soil practices, such as diverse crop rotations, cover cropping, and conservation tillage, affected water use efficiency in tomato crops. Given the water restrictions many California farmers experienced during the recent multi-year drought, it is critical to develop new irrigation strategies that reduce water inputs while maintaining product quality. Specifically, the project tested a standard irrigation schedule (irrigation terminated 30 days before harvest) against a deficit irrigation schedule (irrigation terminated 45 days before harvest) on organic farm fields under sustainable soil management, and on conventional fields characterized by lower soil health metrics.

The study demonstrated that fields under long-term organic management experienced no significant loss in yield when water inputs were reduced. Yield losses on conventional fields were also not significantly affected by deficit irrigation. However, conventional fields under deficit irrigation experienced an 8.6 percent yield loss, while tomato yield in organic fields was only reduced by 3.6 percent when water inputs were reduced. While neither of these losses are statistically significant, they have practical significance for growers. Overall, the findings of this study suggest terminating irrigation slightly earlier in the growing season is a viable strategy, particularly for organic tomato growers, to cope with irrigation water shortages without harming their yields. Moreover, organic fields exhibited significantly better water holding capacity compared to conventional fields, which suggests that healthy soil practices could also benefit farmers in situations where water is too plentiful. Further research in this area would be particularly useful in light of the predictions for increased flooding due to climate change. 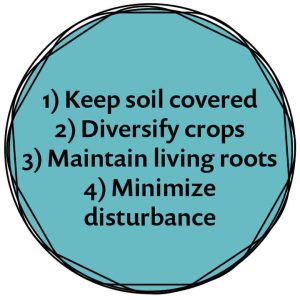 Traditionally, agriculture has been viewed as a major contributor to environmental problems, such as climate change. However, research such as that conducted by Dr. Gaudin and Scott Park highlights the opportunity to innovate farming practices that ameliorate these issues and demonstrates that we do not have to accept business as usual.

OFRF’s Soil Health and Organic Farming series of guidebooks and webinars and all results from OFRF-funded research projects are available for free at ofrf.org.

The Return of Hemp Research