Soils are reservoirs for weeds, pathogens, and nematodes, which if left uncontrolled can devastate crop yields. If pathogen, nematode, or weed levels rise to economically damaging levels it becomes necessary for growers to use soil disinfestation techniques to kill soilborne organisms. Historically, conventional growers use soilborne fumigants to disinfest soil particularly in high-value crops such as strawberry. However, methyl bromide, the most widely used fumigant, has been phased out and banned in most of the world due to its emission of ozone-depleting chlorofluorocarbons. This has spurred heavy research into non-toxic alternative soil disinfestation techniques many of which can be used in organic systems. The following article will highlight a few organic soil disinfestation techniques which can be used to control weeds, soilborne pathogens, and other soilborne pests.

Soil solarization is an organic method, which has displayed effective weed, pathogen, and nematode control. It involves placing a clear, thin (1-3 mil), low-density polyethylene tarp over irrigated soil and generates lethal temperatures for pathogens, pests, and weeds. In general, temperatures generated during soil solarization range from 104-158°F. The tarp is left on the soil for four to eight weeks, depending on the soil temperatures generated. Solarization depends on solar radiation to heat soil and is most effective during peak periods of solar radiation in June and July. Effective temperatures can still be achieved in May, August, and September depending on location. Soil solarization relies on clear, sunny weather, so areas with frequent summer fog or thunderstorms are not appropriate for soil solarization. It is most effective in areas with hot, clear summers such as California’s central valley and desert regions.

Solarization can control most annual weeds which occur in California cropping systems. Shorter times are required to kill cool season annual species (i.e., annual sowthistle) than warm season annual species (i.e., redroot pigweed). Warm season species common purslane can be challenging to kill with solarization as it will germinate in temperatures as high as 113°F. Other annual species which require higher temperatures to kill are those with hard seeds or thick seed coats (Figure 2, T. Jacobs, unpublished data). Common hard-seeded weeds are legume species, bur clover and black medic, Malvacae species, little mallow and velvetleaf, and Erodium spp. (filaree). Perennial weeds such as field bindweed and nutsedge are difficult control with solarization as well. For example, nutsedge tuber mortality will not occur until exposed to temperatures of 122°F or hotter (Webster 2006). For control of perennial and hard seeded weeds daily maximum temperatures of 122°F or higher need to be reached for at least a four-week period (T. Jacobs, unpublished data). 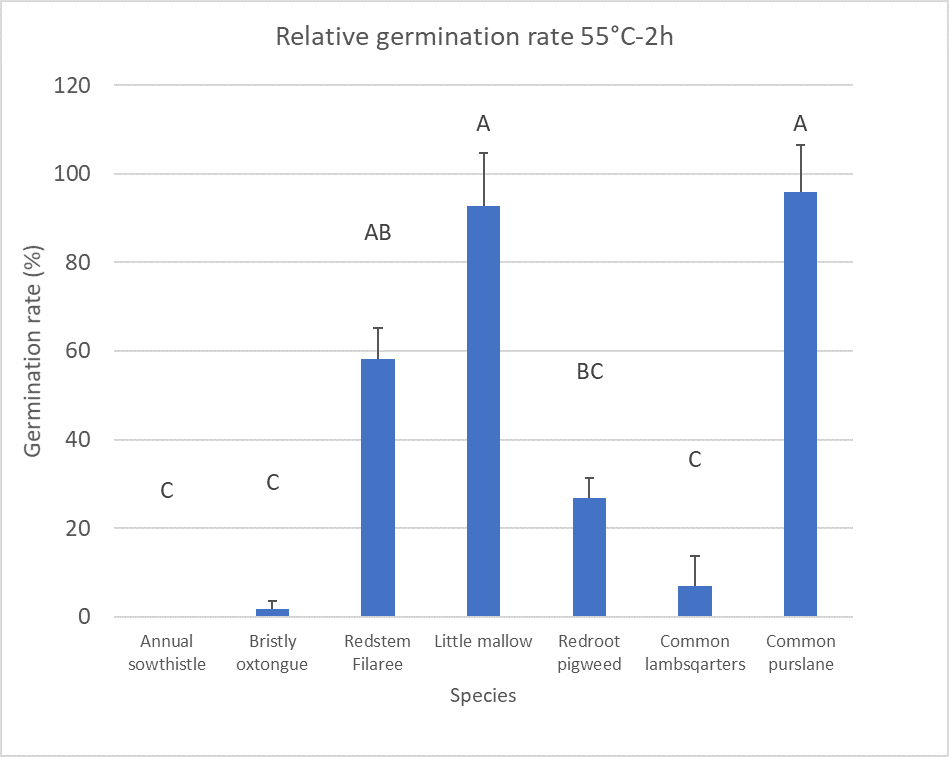 Soil solarization can reduce the disease incidence of many pathogens to an economically manageable level. Solarization will only provide control in the first 8-12 inches of soil. Therefore, the control of some pathogens, which reside deeper in soils, such as big vein disease in lettuce is limited (Iwamoto and Aino 2008). Additionally, mobile soilborne organisms can recolonize root zones of plants after solarization. This makes control of soilborne insects such as garden symphylans via solarization difficult. Before using soil solarization, growers should identify the pathogens and other pests in their soil and consult experts on whether soil solarization is an effective technique for controlling the soilborne organisms.

Solarization has increased yields in a variety of crops. Potential reasons for increased yields due to solarization are reductions in pathogen and weed populations, larger availability of heat solubilized nutrients such as ammonia, and changes in plant physiology (Candido et al. 2011). Costs of solarization vary, depending of plastic prices, but in general the plastic costs in between $150-300 per acre (Stapleton et al. 2008). Application costs will depend on method of application (machine or hand-applied. However, due to yield increases and reduced weeding time, solarization often pays for itself and then some, particularly in weedy or heavily diseased fields.

A wide variety of plastics are available for use in soil solarization. The best plastics are clear/transparent, 1-3 mils thick, and UV-inhibited to prevent breakdown in sunlight. Most agricultural plastic retailers have solarization plastic available. For smaller scale projects, thin (<3mil) greenhouse plastic can be used or painter’s plastic (found at most hardware stores) can be used. Greenhouse plastics are often more durable and reusable, but much more expensive ($2,000-3,000 per acre) so not practical for large scale use. Additionally, painter’s plastic will break down in sunlight and will only last four to six weeks before removal becomes difficult. Thinner plastics will result in higher temperatures but are more prone to tearing. Therefore, thicker plastic should be used in windy areas.

Steps for solarizing soil are as follow: (Elmore et al. 1997)

For more information on soil solarization UC ANR has some great resources at http://ipm.ucanr.edu/PMG/PESTNOTES/pn74145.html

Biofumigation is another soil disinfestation technique available for use by organic growers. Biofumigation uses decomposing plant and animal residues which release biocidal gasses to reduce populations of soilborne organisms (Youssef 2015). Plants from the Brassicaceae family, in particular mustards (Brassica spp. and Sinapis spp.), are the most popular biofumigant due to their release of secondary plant compounds called glucosinolates (Earlywine et al., 2012). Gluscosinolates breakdown into isothiocyanate gases which have phytotoxic properties able to reduce the viability of soilborne organisms. Green manures of mustard cover crops can be incorporated in order to release these biocidal chemicals. Alternatively, mustard seed meal products can be purchased and incorporated into the soil for biofumigation. Mustard seed meals are produced from the remnants of brassica seeds crushed for their oil, biofuels, or condiments (Meyer et al. 2015).

Residues from other plant materials outside of the Brassicaceae family have been tested for effectiveness as biofumigants. Sorghum spp. and other members of the Poacae family have demonstrated potential for use as biofumigants (Stapleton et al. 2010). Sorghum spp. contain dhurrin which breaks down into hydrogen cyanide gas during its decomposition. The incorporation of Sorghum spp. green manure has shown the ability to suppress populations of root-knot nematode and verticillium wilt (MacGuidwin et al. 2012)) Other potential green manures such as buckwheat, canola, and Australian winter pea can reduce inoculum density of pathogens at varying levels (Ochiai et al., 2008; Wiggins and Kinkel, 2004).

In order to use green manures to control soilborne organisms it is important to remember that the chemicals which act as natural fumigants are 1) released upon plant injury as a defense mechanism and 2) extremely volatile. As the chemicals are released after plant injury, cover crops should be mowed with a flail mower before incorporation, to activate the release of chemical compounds. After mowing plants should be incorporated as soon as possible, as 80 percent of the biofumigant gas can volatize within just 20 minutes. To prevent biofumigant gases from escaping, soil should be cultipacked or tarped after incorporation of green manure. Any agricultural plastic will suffice including those used for soil solarization. After incorporating residues into soil, field needs to be irrigated to field capacity to enhance breakdown of secondary plant compounds into biocidal gases. Specifics of biofumigation including seeding rate, time to terminate cover crop, and growing practices of cover crop will differ depending on the cover crop species.

Multiple studies have documented success controlling pathogens at sublethal solarization temperatures (30-40°C) when organic amendments were used in combination with solarization (Blok et al. 2000, Coelho et al. 2001, Núñez-zofío et al. 2011, Tjamos and Fravel 1995). This can expand the use of solarization to temperate regions where normally solarization would not generate lethal temperatures for soilborne pests. Climates where solarization may have its greatest effect are in more northern climates with less intense solar radiation and coastal regions with frequent foggy summers and lower temperatures.

More research needs to be put into biosolarization to determine appropriate levels and types of organic amendments as well as its use in different cropping system. However, biosolarization can increase the efficacy of soil solarization making it suitable to cooler regions or for use during late spring or early fall when soil solarization results in lower temperatures.

Soil solarization and biosolarization can result in effective soil disinfestation reducing pathogen and weed populations to acceptable levels for organic growers. Problems still need to be addressed such as the disposal of plastic, but these techniques are much cheaper, non-toxic and can provide excellent control of soilborne organism for high value specialty, berry and vegetable crops.

The Return of Hemp Research