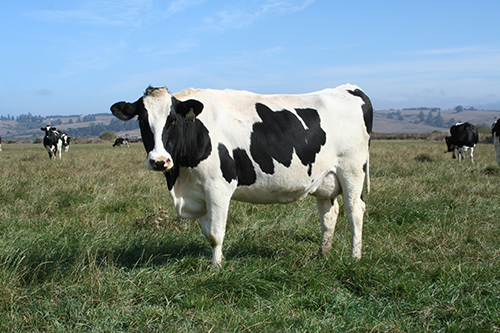 A very large oversupply of organic milk over the past two years has dairy producers seeking ways to cut their costs and stay in business. Like the conventional dairy industry, higher levels of production and a shrinking milk market have taken a large bite out of milk prices.

Sonoma County dairyman Doug Beretta, who has been in organic dairy production since 2007, said prices started a downward trend last year and have continued to fall. Processors are paying less for milk, have cut back on contracted amounts or ended contracts with producers.

Organic Milk Prices
Since 2016, Beretta said, organic producers are receiving about $10 per hundredweight less for their milk. That has prompted more reliance on pastures for dry matter, cutting back on cow numbers or drying cows off early. Dairies that have lost contracts with a processor or handler must either find a new home for their milk—in a saturated market—or consider a drastic cost cutting measure and produce conventional milk. A third option is selling out.

Organic Dairy Production
In California, organic dairy production is concentrated in the North Bay area—Sonoma and Marin counties, where historically dairies relied on grazing to supply a part of their cow’s nutritional needs. Beretta said going forward producers would have to depend even more on grass pastures for feed. Cutting back on cow numbers is also a strategy to stay afloat. With irrigation water, Beretta said he is able to have his cows on pasture 220-230 days per year, which cuts down on feed costs and does not significantly affect per cow production. He said cows on pasture might drop a half-gallon per day.

Beretta said there are about 85 dairies operating in the Sonoma-Marin area and nearly all are organic. The conversion to organic production over the last 12 years, he said, was mainly driven by the high prices for offered for organic milk. The higher production costs in that area were another incentive to enter the organic milk market. Though grazing provides a part of the diet during the year, cows have to be fed purchased feed during the winter months.

In addition to oversupply of organic milk, there has been a shift in consumption. Beretta noted that for the first time in seven years, organic dairy consumption declined in 2017. Large retailers Wal-Mart and Costco rely on volume have cut store prices on organic milk, but when prices for organic milk were several dollars per gallon higher than conventional milk, Beretta said, consumers abandoned organic.

Future of Organic Dairies
Richard Mathews, executive director of Western Organic Dairy Producers Alliance (WODPA) said the outlook for nation’s 2,600 organic dairies appears bleak. Cuts in price and the amount of milk dairies can ship are affecting most dairies. Mathews said in the last two years income at many dairies has fallen by a third.

“Right now this is worse than 2013 when there was a shortage of organic milk,” Mathews said.

Organic dairy producers at that time were struggling and cutting back on cow numbers and production dropped. The largest organic milk processors, to keep their markets, began to offer better prices for organic milk. They urged producers to step up milk production and sparked transition of several large dairies to organic.

“That’s the number one reason we have the oversupply today,’ Mathews said.

About 94 percent of the organically produced milk in the United States is handled by just a handful of processors who have cut prices received by dairy producers by about 25 percent since 2017, he said. The processors no longer pay quality bonuses to producers and Mathews said the smaller producers are being forced out.

Increased Government Oversight
Low milk prices are also coming at a time of increasing government oversight. Mathews said the United States Department of Agriculture (USDA) is moving to emphasize organic dairy compliance including the pasture rule that requires a percentage of the cow’s feed come from grazing. USDA will be conducting inspections of organic dairies to determine if they are complying with the rule.

Idaho dairyman Sean Mallett said the current situation with organic milk production is creating uncertainty about continuing organic milk production into the future. Like many others, he is reducing expenses and pushing pasture dry matter intakes as much as possible during the grazing season. Higher forage based diets are being fed when grazing is not possible.

Mallett, president of WODPA and an organic milk producer since 2007, did have some encouraging news. USDA-AMS (Agricultural Marketing Service) reports and anecdotal evidence from the industry indicate demand for organic milk is beginning to see some rebound from lows in 2017.

CSU Organic Dairy
California State University Chico’s (CSU) organic dairy is somewhat shielded from economic troubles and is fortunate have a home for the milk produced by the school’s 85 cows.

Organic milk produced by the Chico State dairy is sold to Organic West, a handler based in Ripon. From there the milk is sold to fill contracts. The dairy is currently receiving $27.59 per hundredweight, down from near $40 four years ago. Chico State dairy manager and WODPA secretary Darby Heffner said Organic West has established a base plan meaning the dairy will receive a much lower price for any milk shipped over their base.

Like other organic dairies, Chico is counting on its pastures to supply the bulk of the cows’ diets.

“We are trying to get as much grass into the cows as possible. It’s our cheapest, but best quality feed,” Heffner said. Grain is their most expensive feed, and the cows receive about 12 pounds during milking. The farm also produces organic silage and grain hay for the Jersey cross cows.

Heffner said the dairy is managed somewhat differently than a privately owned operation. Because the dairy wants to maximize the use of pastures, they breed the cows to calve January-March. Peak milk production then meets nutritional peak for pasture grasses. Cows are dried up November-December.

The Chico State dairy, opened 11 years ago after about 85 acres on the school farm was converted to organic production. The dairy is the first university-based organic dairy in the West and the second in the nation.

Considerations When Thinking About Transitioning to Certified Organic Production